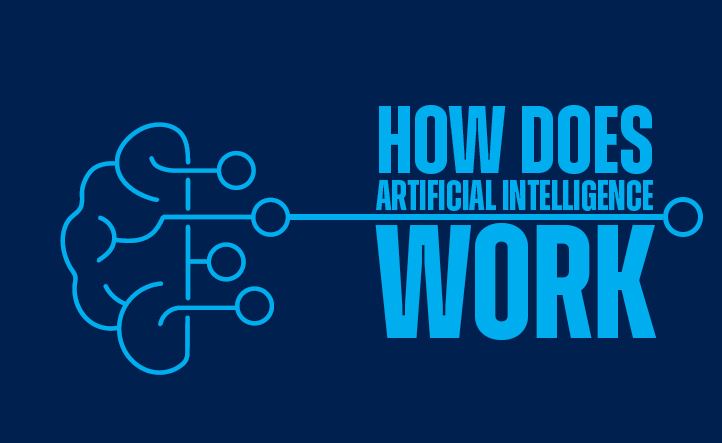 How Does Artificial Intelligence Work?

2020 is the best time to familiarize yourself with the idea of AI (artificial intelligence). Having said that, you don’t need to know all the nuts & bolts as long as you have some basic knowledge of what’s it all about. In short, AI is what makes computers ‘think smarter’. It’s not uncommon to see tech giants employ AI techniques to automate boring, repetitive tasks. Furthermore, machines are being trained to make smart predictions about the weather, stock market, cybersecurity, construction & a variety of other professions.

AI For A Smarter Future

AI is meant to imitate the thought process of a ‘human brain’ which was previously lacking in machines. Previously, the programming paradigm was to instruct the machines to do a specific task within a boundary of do’s & don’ts. However, with increased complexity in problem-solving & abstract thinking, machines are now programmed to think outside of just what they’re supposed to do. This was done by feeding them with a large set of data to draw insights that would help make patterns & draw a bigger picture out of it.

AI is deeply connected with mathematics, computer science, linguistics & philosophy to be able to fully optimized in a manner that’s suitable for humans. The ultimate goal of researchers remains to make AI fit for humans rather than making it counterproductive & dangerous. With further development, research is aiming to ingrain ‘emotional intelligence’ that is able to allow machines to have ‘empathy’ thus enabling them to feel & listen as humans do.

Allowing Machines To Do More

One of the quintessential aspects of AI is automation & machine learning. For instance, if you’re ordering prescription glasses from any renowned website, chances are that they’re already employing techniques of AI to make a better decision with regards to user experience for their visitors.

In the world of sports, you may have heard about the famous chess match between Garry Kasparov & Deep Blue (the latter being a machine trained using AI methods). It was the first sports tournament where people witnessed an instance of a machine winning against a human.

AI can be used to do so much more. Currently, it’s being used to make speech recognition software, such as Alexa by Amazon & Siri by Apple. The rise in AI could let us witness self-driving cars & whatnot. The core element is to train machines to form a generic intelligence that is able to adapt itself to varying circumstances.

Can AI Be Bad For Humans?

On the whole, AI is meant to function as a great enabler for humans. However, one tangent among most skeptics is the imaginative idea of ‘superintelligence’ that is inevitable once machines become smart enough to consciously think for themselves.

Nevertheless, it still seems a far fetched idea as most projects today are done to facilitate how humans live and interact in this world with each other. Overall, AI remains one of the most interesting phenomenons of the 21st century of which there’s still more to be seen.